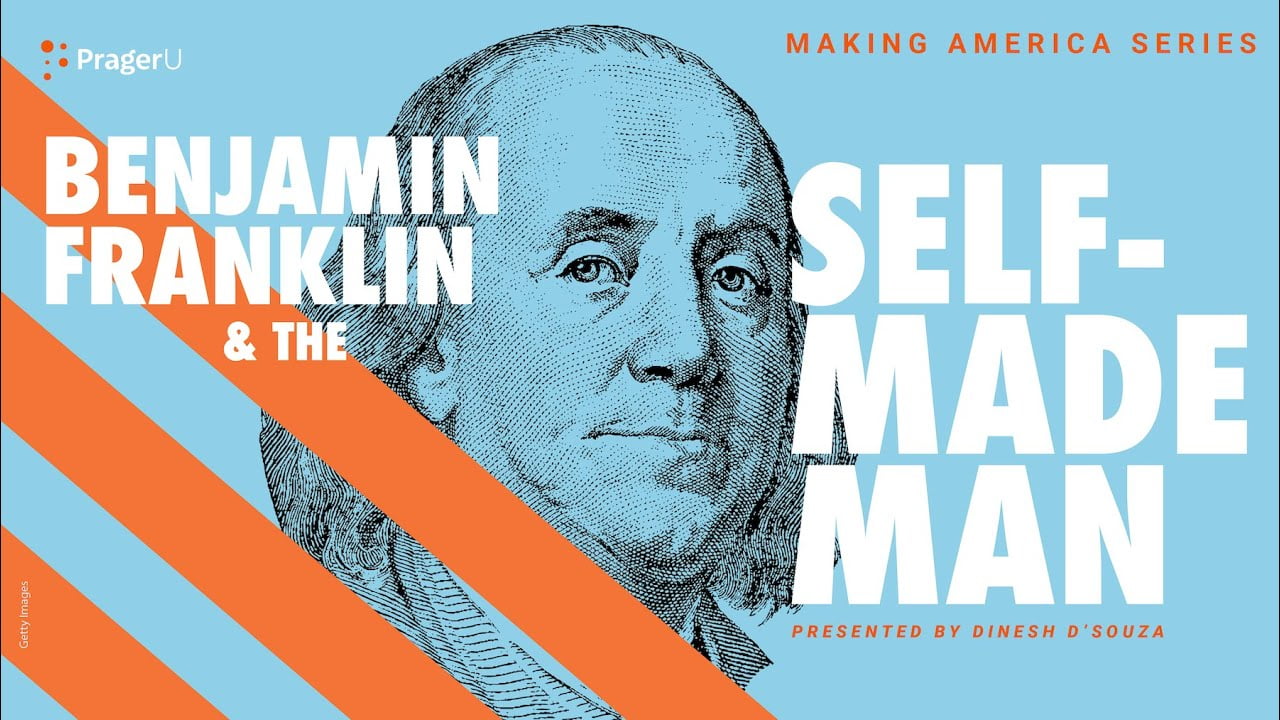 Benjamin Franklin was a scientist, inventor, diplomat, writer, and publisher. But he is best remembered for being the guiding spirit behind the founding of the United States. Dinesh D’Souza describes the key role Franklin played in America’s beginning.

To view the FACTS & SOURCES and Transcript, visit: https://www.prageru.com/video/benjamin-franklin-and-the-self-made-man-making-america

Self-made men existed before America, but they were rare.

After the American Revolution, they became much more common.

They came from everywhere.

They are still coming.

Benjamin Franklin was and remains the prototype.

One of his recent biographers Walter Isaacson put it this way:

“He was the most accomplished American of his age and the most influential in inventing the type of society America would become.”

Franklin’s life, no less than his ideas, conveys the indomitable spirit of both invention and, just as important, self-invention, that define Americans and make them almost instantly distinguishable, even today, by people around the world.

Born in Boston in 1705, the youngest son in a family of seventeen children, Franklin was at various times America’s leading scientist, inventor, diplomat, writer, and publisher.

It’s hard to imagine one person could accomplish so much in one life.

His “Poor Richard’s Almanac,” which dispensed practical daily wisdom and wisecracks in equal measure was the most popular publication of its day.

If there was something important going on, Franklin was in the middle of it.

He was the guiding spirit of the American Founding.

He desperately tried to keep America out of a war with Britain, offering the British government every kind of compromise to avoid the conflict. But when his efforts were rejected and he realized separation from the mother country was inevitable, he threw his heart and soul into the revolutionary cause, the struggle for independence.

As the American envoy in France during the war, he was more responsible than any other person in bringing the French to the American side. Without this alliance, it’s unlikely the rebels would have won. It is more likely, in fact, that they would have lost and all the Founders, including Franklin, would have been tried, convicted, and executed as traitors to the British Crown.

When the new country won its freedom, Franklin, then in his eighth decade and near the end of his life was again on center stage, helping to guide the quarreling delegates toward a new constitution.  A novus ordo seclorum, a new order for the ages, he called it.

At a low point in the great Philadelphia debate over the nation’s founding document when everyone, including Washington, was willing to give it up as a bad job, Franklin single-handedly saved the enterprise and revived the spirits of the delegates by summoning them to an inspirational prayer.

And it was Franklin who summed up the event for posterity. When asked what kind of government the convention had created, he quipped “A republic, if you can keep it.”

Franklin viewed America itself as a great invention, a new kind of nation for a new kind of man.  Even so, Isaacson concludes, “The most interesting thing that Franklin invented, and continually reinvented, was himself.”

His brilliant Autobiography reveals a polymath who was endlessly curious and endlessly and pleasantly surprised by life. He was also never quite satisfied. In a way that is again quintessentially American, he sought to make it (whatever it was he was working on) better.

So, he saw construction workers with axes building a fort and timed them to see how long it took; inquired into the art by which native Indians concealed their fires; conducted experiments and published his observations on electricity.

Franklin took this curiosity and turned it on himself. He viewed his own life not simply as a story of change, but rather as a continuing quest for self-improvement.

For the complete script as well as FACTS & SOURCES, visit https://www.prageru.com/video/benjamin-franklin-and-the-self-made-man-making-america