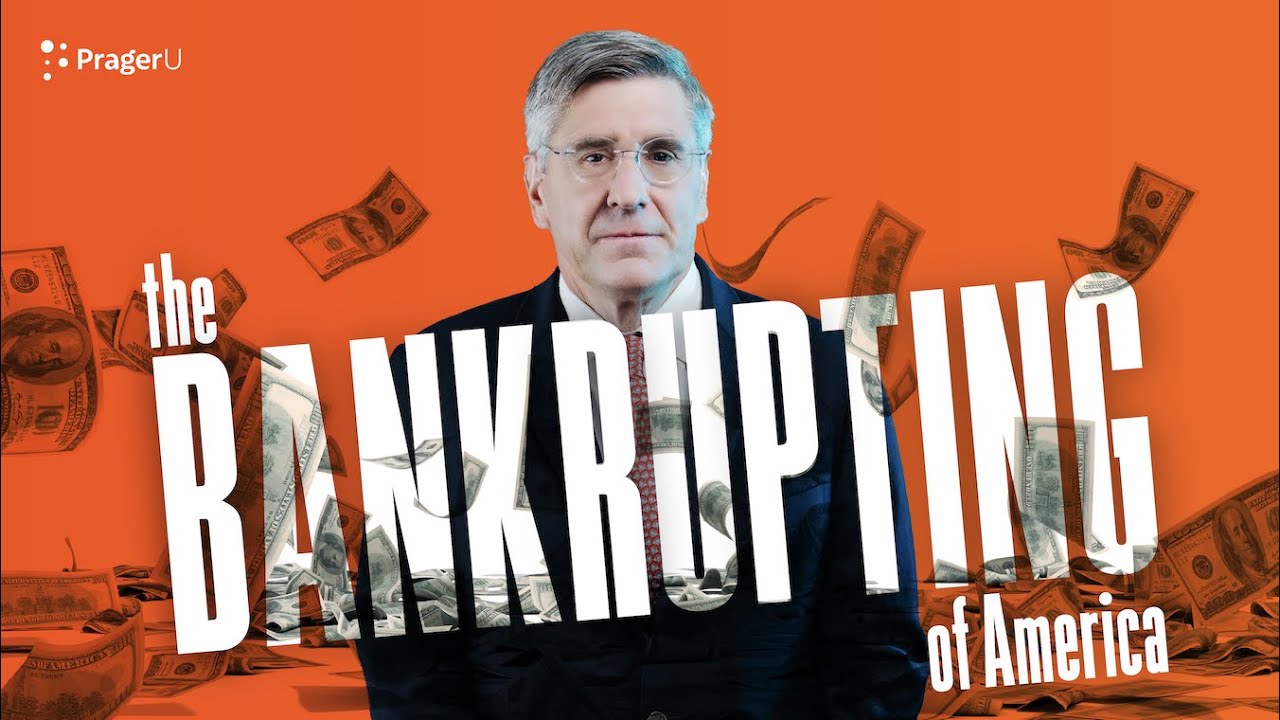 What happens when you spend money you don’t have? Everyone knows the answer to that question. But what happens when the government does it on an unprecedented scale? Sooner or later, all debts have to be repaid. The question is, who’s going to foot the bill? Economist Stephen Moore has the answer.

To view the FACTS & SOURCES and Transcript, visit: https://www.prageru.com/video/the-bankrupting-of-america

Sitting up in bed, Mom holds her precious new baby in her arms. Alongside her, Dad beams with pride. In the background, a doctor smiles. So does the nurse, dressed in her scrubs.

The Government Debt Collector, clad in a black suit, stands in the doorway

Have a nice life.

See the baby with a toe tag.
—

This isn’t a made-up horror story. It’s real. It is the unpaid credit card bill our kids and our grandkids are facing—money they didn’t spend but will have to pay.

The Democrats point their finger at the Republicans. The Republicans point back at the Democrats. The truth is that the politicians of both parties have brought us to the edge of this financial cliff.

They say they’re spending all this money with the best of intentions: the trillions are needed to end hunger and reduce inequality; provide everyone with free health care; and save the planet from global warming.

But there is no way around the simple math. You can’t spend what you don’t have—not indefinitely. Debts have to be repaid.

We’ve been sweeping this problem under the proverbial rug for decades, but now we’re running out of rug.

During the year of the Covid crisis, a Republican president, Donald Trump, approved a massive increase in government spending. His reasoning went like this: We shut down the economy. We have to help people out.

Did he go too far? Maybe, but just about everyone agreed something had to be done.

Then, Joe Biden, a Democrat president, entered the White House and called for $1.9 trillion in additional spending—even though one trillion of the previous Covid relief money had not yet been spent, and even though the economy was already well on the way to recovering.

Then the new President quickly asked for another $1.1 trillion for “infrastructure”, which used to mean projects like roads, bridges, and airports, but now includes giveaways like electric car charging stations for Tesla owners. By the way, 19 Republican Senators joined the Democrats. Nobody is blameless.

But, wait—that only turned out to be President Biden’s opening bid. He put another $3.5 trillion in spending on the table for a whole slew of goodies: free child-care, free community college, student loan forgiveness, expanded Medicare and Medicaid, vast subsidies for “green” technology, and on and on.

Add all this extra spending and you arrive at $6 trillion dollars. Yes, that’s a six with 12 zeroes after it.

This is a level of spending we have never seen.

The numbers are so big, it’s impossible to grasp. But to offer a little perspective consider this.

$6 trillion is more money (adjusted for inflation) than we spent on The Revolutionary War, the Civil War, World War I, World War II, the Louisiana Purchase, the Transcontinental Railroad, the Interstate highway system, and the Moon Landing combined.

Normally, we borrow money as a nation during a period of crisis. Then, when the crisis ends, we start to pay down the debt.

What the Progressive Left wants to do is launch the biggest spending spree in American history—after the crisis is over!

What’s looming ahead, however, is a new crisis: a nuclear-sized debt bomb. Our multi-trillion dollar national debt was bad enough before all this proposed spending.

For the complete script as well as FACTS & SOURCES, visit https://www.prageru.com/video/the-bankrupting-of-america

The End of Women’s Sports

admin
43K
Selina Soule was one of the top five female high school sprinters in Connecticut… until competing against biological boys chan...

admin
39.7K
In August of 2019, the New York Times published The 1619 Project. Its goal is to redefine the American experiment as rooted not in l...

admin
37.8K
Have you heard of Critical Race Theory? If you haven’t, you will. It’s coming to a high school, college, or workplace diversity trai...

admin
37.6K
Say what you will about the last 4 years — you can’t deny that Donald Trump’s presidency has been eventful. In thi...

What Are Your Kids Learning in School?