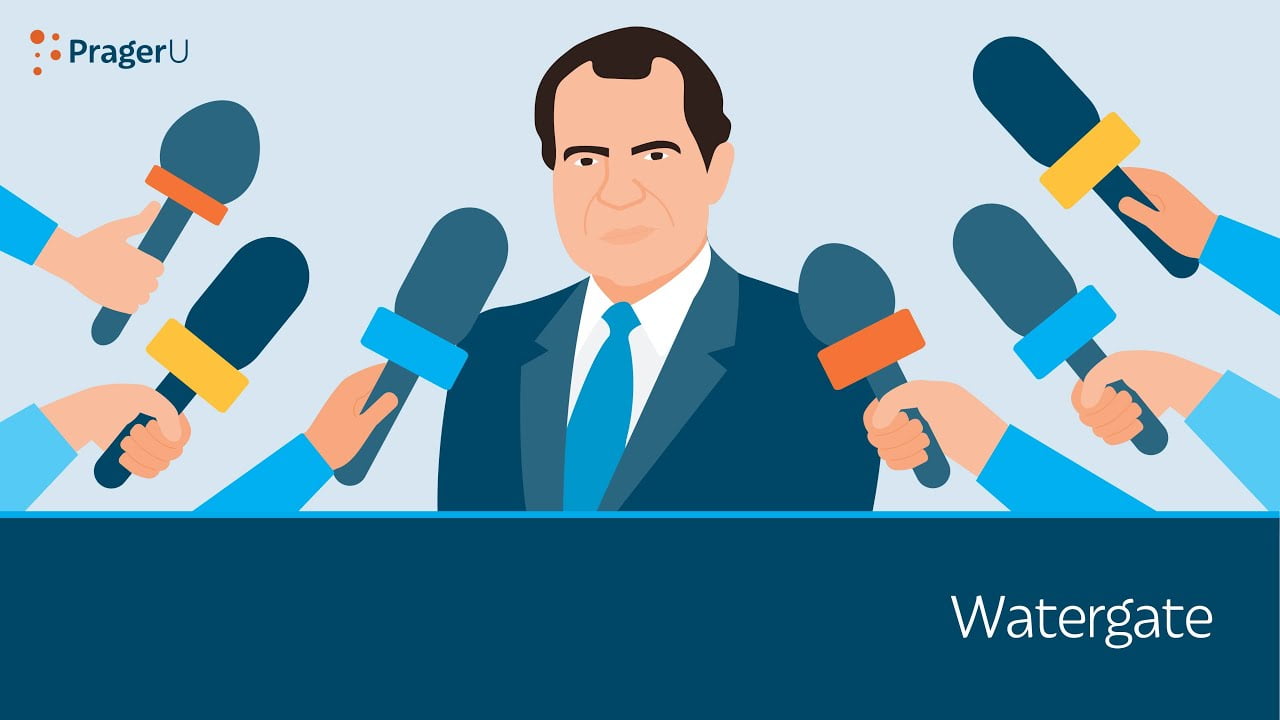 If you ask most people to explain what Watergate was all about, they might say that it was about a bungled break-in that brought down a president. That’s true, but the break-in is the least significant part of the scandal. What else should you know? Radio host and columnist Hugh Hewitt has the real story.

To view the FACTS & SOURCES, Transcript, and Quiz, visit: https://www.prageru.com/video/watergate

The most famous political scandal in American history is, of course, Watergate. It’s so famous that even now, 50 years after it happened, almost every scandal of any kind comes with an obligatory “gate” after it.

If you ask most people to explain what Watergate was all about, they draw a blank. If they know a bit of history, or perhaps they lived through it, they might say something like this: “It was about a bungled break-in that brought down a president.” That’s true. But the break-in is the least significant part of the story.

Watergate was, first and foremost, a political war between the president, Richard Nixon, and the media, which in those pre-cable days meant ABC, CBS, NBC, the New York Times, and the Washington Post. The media’s aim, in the words of British historian Paul Johnson, “was to use publicity to reverse the electoral verdict of 1972.”

Why? What did the media have against Nixon? That’s a complex question, but we can essentially boil it down to three things: 1. He was despised by the East Coast liberal elite, of which the Washington press corps was a key component. 2. He was a staunch anti-communist. The media considered the communist threat to be overblown. 3. He refused to abandon South Vietnam. Nixon insisted on “a peace with honor.” The media was entirely “anti-war.”

Even though Nixon spent most of his adult life in New York and Washington, he never fit in. Born in a small town in California, there were no Ivy League degrees on his resume. To make matters worse, while not being part of McCarthyism, he made his reputation aggressively exposing Alger Hiss, a communist in the U.S. State Department in the late 1940s. After serving as vice president under Dwight Eisenhower for eight years, he ran against and nearly defeated John F. Kennedy, the paragon of East Coast elitism in 1960.

Then, eight years later, and much to the media’s dismay, Nixon mounted an improbable political comeback to win that year’s presidential election. And then, as if rubbing the media’s nose in it, he won again in a 49-state landslide in 1972.

Something had to be done. Ironically, Nixon’s own people provided the opportunity the media had been waiting for. On June 17, 1972, five men associated with the Nixon re-election campaign broke into the offices of the Democratic National Committee headquarters in the Watergate office building in Washington, D.C. Presumably, they intended to gather information about the Democrats’ campaign strategy. Whatever their purpose, it was a painfully dumb plan that turned catastrophic when the burglars were caught in the act and arrested by D.C. police.

Nixon found out about it—like everyone else—in the morning papers. Initially, he didn’t think it was a big deal. “I had been in politics too long,” he later wrote, “and had seen everything from dirty tricks to vote fraud. I could not muster much moral outrage over a political bugging.”

Today, most would conclude that if he had simply acknowledged his campaign’s responsibility—“owned it,” as we say, fired those responsible, and apologized, the whole sorry mess would have been rendered the minor incident it was. But, as historian Evan Thomas noted, Nixon “wasn’t paying attention and when he was confronted with the problems below deck, he didn’t really engage… by the time he did, it was too late.”

So the scandal grew beyond his control. Three men made sure of that: a publicity-seeking judge, a revenge-seeking FBI official, and a partisan special prosecutor.

The judge was John Sirica. Suspecting a vast conspiracy, Sirica threatened the burglars with lifetime prison sentences if they didn’t rat out the people who authorized the crime. The media loved Sirica. For a time, he was the most famous jurist in the country.

For the complete script as well as FACTS & SOURCES, visit https://www.prageru.com/video/watergate