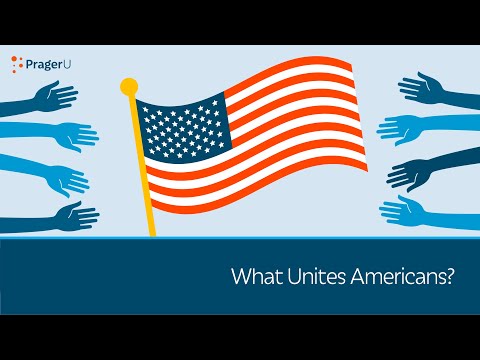 Americans come from every corner of the globe. We represent every race, every ethnicity, and every religion. So what brings us all together? Bobby Jindal, former governor of Louisiana, answers this key question.

To view the FACTS & SOURCES and Transcript, visit: https://www.prageru.com/video/what-unites-americans

Americans come from every corner of the globe.

We represent every race, every ethnicity, every religion.

So, what unifies us?

How can history unify us if we come from so many different places?

My parents illustrate my point.

They came from India and settled in the rural south. You don’t get much further away from your ethnic origins than that.

Like generations of immigrants before them, my parents, my brother and I studied the inspiring stories of the Mayflower, the Boston Tea Party, the settling of the West; the personal stories and struggles of great American men and women.

We fully adopted American history as our own.

My mom still makes a mean curry, my parents still practice their Hindu religion, but they are also as American as apple pie.

That’s because once you’re an American, you’re fully American.

The new citizen from Armenia, Cambodia, Bolivia or Nigeria is considered every bit as American as the great, great granddaughter of a Civil War veteran.

In a speech before the Civil War, the abolitionist preacher Theodore Parker popularized what he called “the American Idea.” Parker’s recipe combined three ingredients. Only in America did they exist simultaneously.

All people are created equal…

All should have the opportunity to develop their individual talents.

Parker, whose sermons inspired Abraham Lincoln and Martin Luther King, believed in one American set of values, supported by all Americans, and open to all Americans.

Thanks to Lincoln, King and many others, what Parker envisioned has largely come to pass.

No country has woven more people of different races, backgrounds and ethnicities more successfully into a single country than America.

But this tapestry is now being ripped apart at the seams.

These ideals, it turns out, were just a cover for systemic racism and exploitation.

That is the new narrative from the progressive Left.

It is being sold to the American public by our educational institutions, our media and now even major corporations.

The consequences of this are obvious and tragic.

Imagine a child coming to the United States (or any American-born child, for that matter) and learning that the nation was created not to promote liberty, but to promote the Founders’ slave interests.

Or that California, Texas, and Arizona were stolen from Mexico.

Or that free markets exploit workers rather than providing them with opportunities for a better life.

Or a new immigrant being told in an equity, diversity and inclusion seminar that his fellow white employees secretly despise him, even though they seem to treat him well.

In short, Parker’s American idea has been turned upside down.

Instead of an aspirational society, the Left sees people limited by the circumstances of their birth. If you’re born white, you’re privileged. If you’re born a different color, you’re a victim.

The whole idea — and reality — of America was that, with hard work and self-discipline, and, of course, a little bit of luck, you could transcend your past and make your own future.

The Left rejects this. Your group identity defines you. Or to be more precise, pre-defines you.

Only with the aid of the government can your identity group succeed. As an individual, you’re powerless — unless of course you’re white.

The Left has even changed the way we seek social improvement.

For the complete script as well as FACTS & SOURCES, visit https://www.prageru.com/video/what-unites-americans