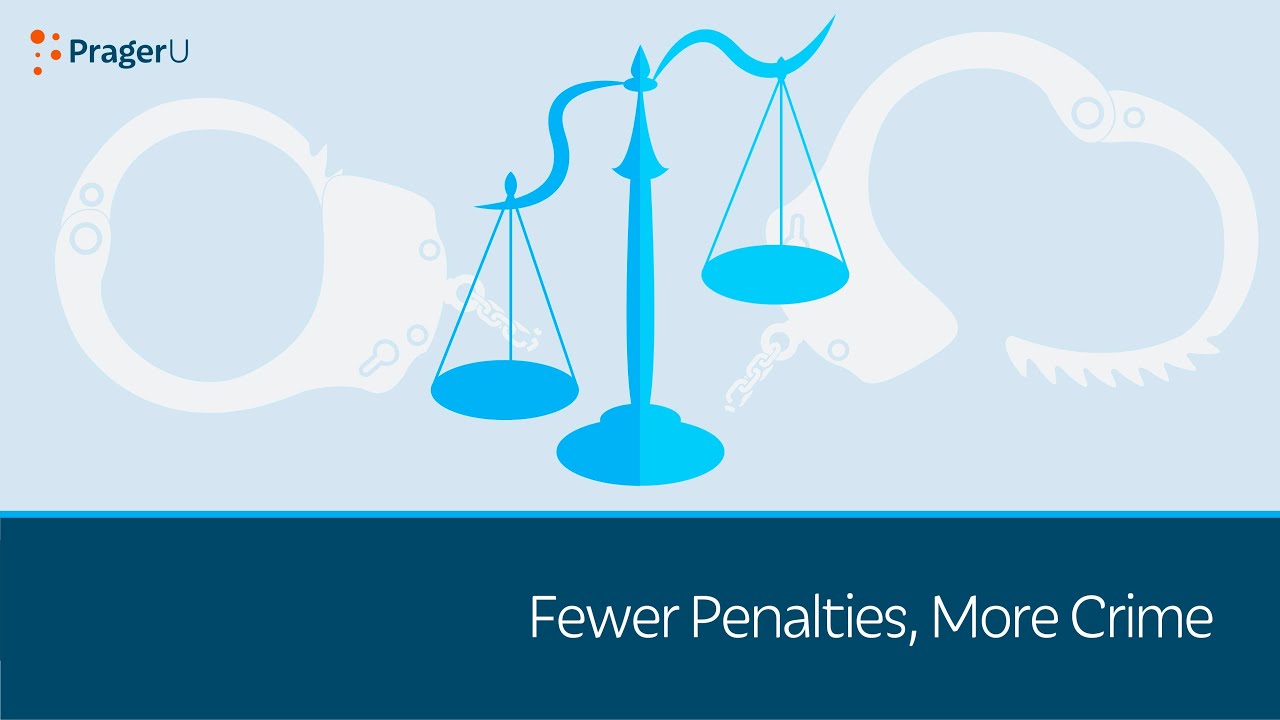 The role of a prosecutor is to pursue justice and enforce the law. That sounds straightforward, but more and more, that doesn’t seem to be happening. Why? Rafael Mangual, Deputy Director of legal policy at the Manhattan Institute, answers this important question.

To view the FACTS & SOURCES and Transcript, visit: https://www.prageru.com/video/fewer-penalties-more-crime

The role of the prosecutor is to pursue justice.

This primarily means enforcing the laws passed by the representatives of the people. Enforcement protects citizens from future crime, but also offers some measure of satisfaction to the victims of crime. This is the basis of civil society. But over the last several years, a growing number of American cities have elected prosecutors who are deemphasizing enforcement.

This is by design. These prosecutors openly vowed to “reform” the criminal justice system by means of selective prosecution. Their motive, seemingly well-intentioned, is that criminals do better when they’re not incarcerated—that many people who are in jail shouldn’t be there because they don’t present a danger to society.

So what does this reform look like?  Here are just a few examples:

In Boston, Suffolk County District Attorney Rachel Rollins has ceased prosecuting 15 different offense categories, including charges like trespassing, stealing less than $250, destruction of property, and drug possession with the intent to distribute.

In Brooklyn, Eric Gonzalez has either refused to prosecute or has rerouted many gun offenders to pretrial diversion programs.

In Los Angeles, George Gascón has actually prohibited prosecutors from speaking at parole hearings. This forces victims and their families to take on the burden of speaking in opposition to early releases. He has also ordered his prosecutors not to pursue sentencing enhancements enacted by elected representatives, including those for “third strikes” and gang-related offenses.

In San Francisco, Chesa Boudin instituted a policy prohibiting prosecutors from seeking bail and heavily restricted their ability to ask for pretrial detention.

This is not a fringe movement. In addition to the four cities just mentioned, St. Louis, Baltimore, Chicago, Dallas, Houston, Orlando, Portland, San Antonio, and others have taken the same route. In fact, more than 40 million Americans now live in cities with so-called “progressive” prosecutors. That’s a lot of “reform” happening outside the institutions designed to make the law: state, county, and city legislatures.

And that’s concerning for a couple of reasons. First is that a single official shouldn’t be able to sidestep the political process and decide what laws to enforce or not. But a second, larger and more obvious, concern is that these changes aren’t making our cities safer. Based on the data, they seem to be making our cities less safe.

Take, for example, George Gascón’s ban on third-strike sentencing. In 2007, economists studied the deterrent effects of California’s three-strikes law. What they found was a 17-20% reduction in the felony arrest rate among those with two strikes. That’s a pretty big benefit to throw away on one man’s say-so.

How about the goal of sharply curtailing pretrial detention? The data out of jurisdictions like New York and Chicago tell us that increasing the number of pretrial defendants out on the street will most likely mean more crimes committed by that population—crimes local residents could certainly do without. One study of Chicago’s bail reform concluded that “after more generous release procedures were put in place…the number of pretrial [defendants] charged with committing new violent crimes increased by an estimated 33%.”

In New York, the share of violent felony arrests constituted by those out of jail, either on reduced bail or released without bail, while awaiting trial for previous crimes jumped by more than 27% in the first nine months of 2020 (the year New York State’s bail reform went into effect), and that’s compared to the same period in 2019.

For the complete script as well as FACTS & SOURCES, visit https://www.prageru.com/video/fewer-penalties-more-crime