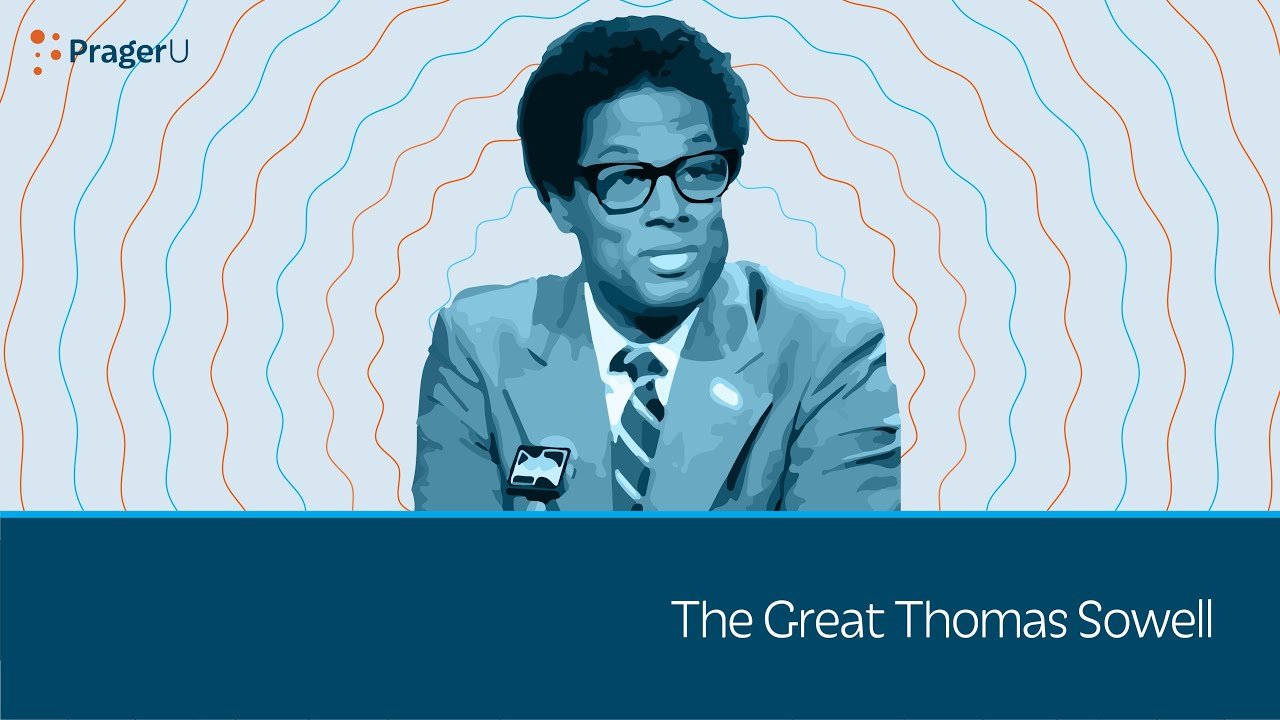 He’s an economist, a historian, a philosopher, and one of the greatest social theorists America has ever produced. His name is Thomas Sowell, and he might be the most important scholar you’ve never heard of. Jason Riley, Senior Fellow at the Manhattan Institute, tells his inspiring story.

To view the FACTS & SOURCES and Transcript, visit: https://www.prageru.com/video/the-great-thomas-sowell

He’s an economist, a historian, a philosopher, and one of the greatest social theorists America has ever produced. In a career spanning six decades, he’s published more than 40 books and written thousands of newspaper columns on topics ranging from economic history and political philosophy to social inequality, education, and race.

His name is Thomas Sowell, and he might be the most important scholar you’ve never heard of.

Born during the Great Depression in rural North Carolina in a home with no electricity, Sowell was orphaned when he was just a toddler. Taken in by a distant relative, he grew up in New York City’s Harlem neighborhood. An unruly teen, he was obviously intelligent and obviously full of anger. The latter initially overwhelmed the former.

He dropped out of high school, left home at age 17, and lived in a shelter for homeless boys where he kept a knife under his pillow at night for protection.

The Marines saved him. It wasn’t by choice. He was drafted during the Korean War. In the military, he gained habits of personal discipline and developed self-control. He taught pistol shooting and learned photography, which became a lifelong hobby.

After leaving the Marines, he went to college on the G.I. Bill—eventually graduating from Harvard and doing additional studies at the University of Chicago under the guidance of the legendary economist Milton Friedman.

He began his intellectual journey as a committed Marxist, but soon reached a life-altering conclusion: Marxism didn’t work. After studying the effects of various government regulations, including minimum wage laws, he concluded that free markets were a far better alternative, particularly for disadvantaged groups.

In the 1960s and 70s, Sowell taught economics at Amherst, Cornell, and UCLA, distinguishing himself as one of the country’s top experts on economic history. Since 1980, he’s been a senior fellow at the Hoover Institution at Stanford.

It was around this time that Sowell turned his attention to social theory and political philosophy, writing books like Knowledge and Decisions and A Conflict of Visions, which many consider to be his best professional work. He also began writing more about racial controversies, which is why he’s not as well-known and appreciated today as he should be.

Sowell has been a vocal critic of civil rights leaders and of liberalism’s misguided efforts to help the black poor. His targets over the decades have included welfare programs, racial preferences, multiculturalism, and opposition to school choice. Sowell brings the same empirical approach to writing about social policy that he brings to writing about economics.

His focus is on the facts and the evidence.

The actual results of a policy matter much more to him than the good intentions of politicians and policy makers. This is perfectly captured in his concept of “Stage One” thinking. Liberal politicians propose expensive policy solutions and never ask the only questions that really matter: what are the long-term costs and consequences? In other words, what happens beyond stage one? By the time these costs and consequences fully manifest themselves—and they’re usually disastrous—the politicians who originally set the policies in motion are long gone. They’ve derived all the political benefit and paid none of the cost.

In books like Race and Culture, Sowell has demonstrated racial preferences are counterproductive; that political power is not necessary to advance economically; and that racial discrimination cannot be used as a blanket explanation for disparities in employment, education, and income.

For the complete script as well as FACTS & SOURCES, visit https://www.prageru.com/video/the-great-thomas-sowell