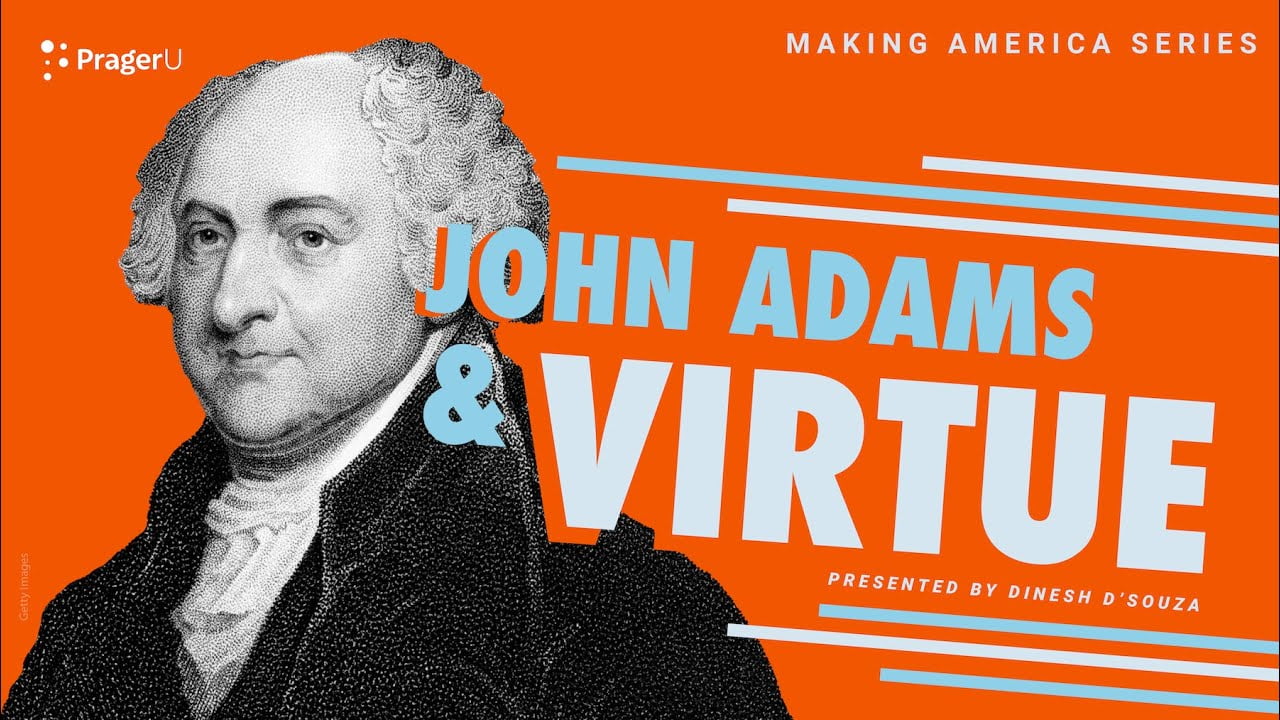 Life, liberty, and the pursuit of happiness is the shared goal of every American. We all have a pretty good idea about what life and liberty mean, but what about pursuit of happiness? John Adams, our second president, understood how crucial this concept was to the American idea. Dinesh D’Souza explains.

To view the FACTS & SOURCES and Transcript, visit: https://www.prageru.com/video/john-adams-and-virtue-making-america

“…life, liberty and the pursuit of happiness” is the shared goal of every American.

The US Constitution was written to make it possible.

We all have a pretty good idea about what life and liberty mean, but what about the last part of the phrase—the pursuit of happiness?

That’s a little harder to pin down.

Let’s give it a try.

The 17th century English philosopher John Locke spoke narrowly of the rights to life, liberty and property.  The Declaration of Independence widened the scope to something far grander, the quest for what Aristotle termed the true end of all human endeavor—happiness itself.

We think today of happiness in relativistic terms, something each person pursues in their own way. For example, in Shakespeare’s Hamlet Polonius advises Laertes, “To thine own self be true.” In other words, be yourself.

We hear this a lot today.

To John Adams, America’s second president and a seminal figure in the creation of the country, this was bad advice.

For Adams and the Founders generally, happiness was a modus vivendi, a way of living, expressed by how one conducted oneself, especially in public.

Adams understood that people are an imperfect amalgam of the admirable and the abominable; that “being yourself” does not automatically lead to good character. It’s more likely, in fact, to lead to self-absorption. The only way to attain a good character is, like everything else, to work at it.

The best way to do this, Adams contended, was literally to imagine a noble character—here we’re talking about a character like a character in a play—and then strive to become that character.

Walk like that character, think like him, feel like him, act like him. Over time, through the result of continual effort and the slow working of habit, one can become that person. Adams practiced what he preached. In this way, he became a public figure both incorruptible and unfailingly honest. He became the best version of himself.

This takes us back to the Founders’ conception of happiness.

They subscribed to the Aristotelian belief that genuine happiness is achieved when “the activity of the soul” is in perfect harmony “with virtue.”  None of the founders reflected on this idea more than John Adams.

Not only did he want his own life to be defined by virtue, he also wanted the infant republic to be built on it.  Without virtue, he believed, America could not succeed.

Today the term “virtue” seems anachronistic, a notion from the past. But to Adams, America’s survival as a free country depended on it.

“The preservation of liberty,” he wrote, “depends on the intellectual and moral character of the people. As long as knowledge and virtue are diffused generally among the body of a nation, it is impossible they should be enslaved.”

In a monarchy, Adams noted, the people don’t need virtue. They can be “as vicious and foolish as they please because all political responsibility lies in the hands of the king and his retinue.  In a republic, however, the people are the government.  So, the virtue of the state is a reflection of the virtue of the people.

Given that human nature is deeply flawed, this created an obvious problem of which Adams was painfully aware.

“I have seen all along my life,” he observed, “such selfishness and littleness… that I sometimes tremble to think that, altho we are engaged in the best cause that ever employed the Human Heart… the Prospect of success is doubtful—not for Want of Power or of Wisdom but of Virtue.”

How could the new nation develop a virtuous citizenry? A devout Christian with enormous respect for the Jews and the Hebrew Bible, Adams certainly saw belief in God and fear of His judgment as indispensable. So was a proper education.

But he did not think these were enough.

A virtuous government would also be necessary. Here’s where a clearly delineated, and easily understood constitution would be essential. And no one worked harder than Adams to create one.

For the complete script as well as FACTS & SOURCES, visit https://www.prageru.com/video/john-adams-and-virtue-making-america