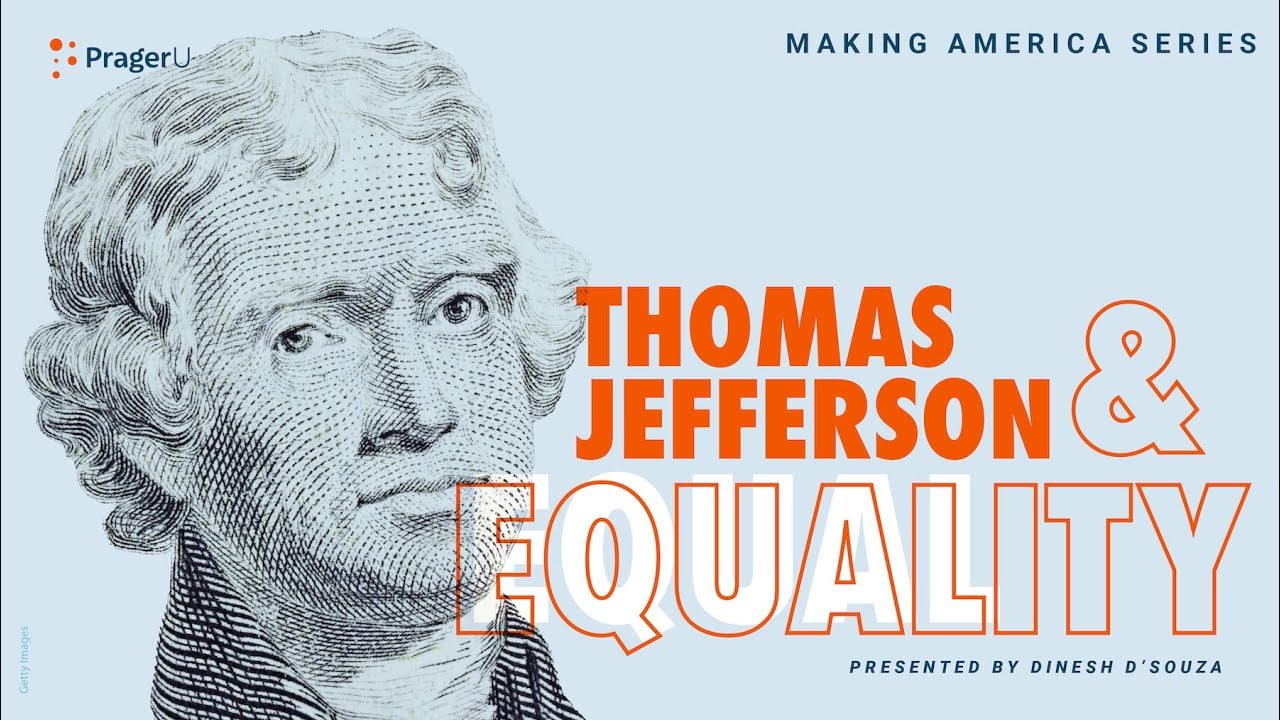 Do the Ends Ever Justify the Means? Machiavelli Demystified with Dr. Khalil Habib

“All men are created equal…” So says the Declaration of Independence, eloquently penned by Thomas Jefferson. But how do we reconcile the obvious contradiction between Jefferson’s words about freedom and his actions as a slave owner? Dinesh D’Souza answers this question.

To view the FACTS & SOURCES and Transcript, visit: https://www.prageru.com/video/thomas-jefferson-and-equality-making-america

In one sentence Thomas Jefferson not only laid the foundation stone for a new nation he also set that new nation, the United States of America, on a path we still follow today.

His affirmation in the Declaration of Independence that “all men are created equal,” and “endowed by their Creator with certain unalienable rights,” may be the most influential words ever written this side of the Bible.

The US Constitution ratified a little more than a decade later, was guided by those words.  Subsequent amendments, including the Fourteenth Amendment, passed after the Civil War, granting “equal rights under the law,” seem, for all their grandeur, to be restatements of the equality principle in Jefferson’s original Declaration.

Yet Jefferson is controversial today because he embodies the contradictions of the founders.  Indeed, progressive scholars say, he was the worst of them, the most hypocritical, because the very man who insisted that “all men are created equal” not only permitted slavery, but himself owned slaves.

Did Jefferson not see the glaring contradiction between his principles and his practices, between the principles and practices of the infant American nation?  According to Chief Justice Roger Taney, who authored the notorious 1857 Dred Scott decision affirming slavery in the territories, neither Jefferson nor the other founders could have seriously meant that “all men are created equal.” They didn’t act on the principle, so they couldn’t have believed it.

Modern progressive jurists such as Thurgood Marshall, as well as historians such as John Hope Franklin, have, again with an irony that should not go unnoticed, adopted the Taney view.  In Franklin’s words, the founders “betrayed the ideals to which they gave lip service.”  They wrote, “eloquently at one moment for the brotherhood of man and in the next moment denied it to their black brothers.”

No defense of Jefferson or the American founding is possible that agrees with this assessment.  How, then, can Jefferson and the founding itself be vindicated against this most serious charge?

For the answer let’s look again at the Declaration and what comes immediately after the statement “all men are created equal” — that governments derive their legitimacy from the “consent of the governed.”  This is the democracy principle and it is no less important, no less foundational, than the equality principle.

With this is in mind, let’s turn to the practical choice faced by the founders. Progressives say they should have outlawed slavery in the original Constitution. Yet slavery was legal in all the states that sent representatives to Philadelphia in 1789.

How could these representatives outlaw slavery without the consent of the people in their states?  Were they expected to do so by overriding popular consent?  In that case, they would be overthrowing democracy itself, before it was even introduced as the bedrock of the new Constitution!

Furthermore, as everyone in Philadelphia knew at the time, many states would not have joined a union that forbade slavery at the outset. Perhaps a few would have done so, but no more.

Had those who opposed slavery held firm on the issue, the union would have consisted of a handful of states, or it would have remained a utopian idea affirmed by a group of high-minded founders—but they would be founders… of nothing.

As Jefferson himself said about the slavery issue, “We have the wolf by the ear, and we can neither hold him nor safely let him go.”

It is not reasonable—in fact, it is downright obtuse—to ask of statesmen to do what they manifestly cannot do.  It is only reasonable to ask them to make the best choices available to them under the circumstances—to hold the wolf, in Jefferson’s own terms, until he can safely be let go.

In Abraham Lincoln’s view, the American founders did just that. They temporarily allowed slavery in practice, while constructing a framework based on antislavery principles.

For the complete script as well as FACTS & SOURCES, visit https://www.prageru.com/video/thomas-jefferson-and-equality-making-america

Do the Ends Ever Justify the Means? Machiavelli Demystified with Dr. Khalil Habib